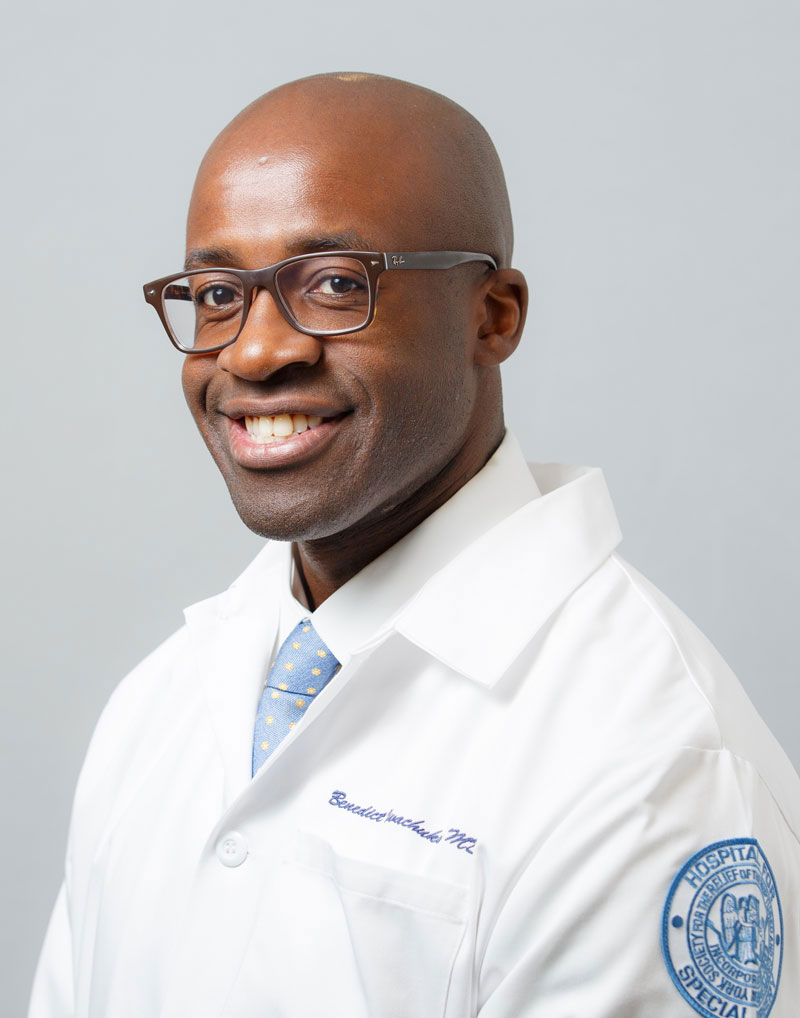 Hamstring injuries typically occur during the push-off phase of running, and are most commonly found in athletes involved in football, soccer, basketball and running.  In addition to deep buttock pain, patients and athletes often experience swelling and bruising, sharp sudden pain in the back of the thigh, and pain when sitting, accelerating or pushing off to run. Proximal hamstring repair surgeon, Doctor Benedict Nwachukwu provides diagnosis as well as surgical and nonsurgical treatment options for patients in Manhattan, New York City, NY who have developed a proximal hamstring tear. Contact Dr. Nwachukwu’s team today!

What are the hamstrings?

The hamstrings are a group of four muscles located in the back of the thigh. The semitendinosus, semimembranosus and the long and short head of the biceps femoris make up the grouping that play an important role in knee flexion and hip extension. The hamstring muscles start at the bottom of the pelvis at a location referred to as the ischial tuberosity. The hamstrings cross the knee joint and end at the lower leg. The tough, connective tendons join muscle fibers near the same location.

A hamstring injury, such as a hamstring tear, is quite common in the athletic population. This injury is commonly found in athletes involved in football, soccer, basketball and running. A hamstring injury typically occurs during the push-off phase of running. Orthopedic sports medicine surgeon, Dr. Benedict Nwachukwu, specializes in a number of sports injuries, including hamstring tears which cause hamstring pain for patients in Manhattan, New York City and surrounding New York boroughs. What is a proximal hamstring tear?

A proximal (high) hamstring tear occurs when one or more of the muscles become torn from the ischial tuberosity, the attachment site. Hamstring injuries are classified in the following grades:

This injury is typically caused by muscle overload. The hamstring muscles can become strained from muscle tightness, muscle imbalance, muscle fatigue and poor conditioning, leading to a hamstring tear.

What are the symptoms of a proximal hamstring tear?

Patients and athletes most often complain of deep buttock pain. Other symptoms related to proximal hamstring tears are:

How is a proximal hamstring tear diagnosed?

Dr. Nwachukwu diagnoses a proximal hamstring tear by performing a physical examination and a review of symptoms. He will check for any visible bruising and swelling in the injured leg. An X-ray and MRI may also be performed to determine the extent of injury and to properly classify the injury as a Grade 1, 2 or 3.

How is a torn hamstring repaired?

The majority of tears to the hamstring are partial thickness tears where only a portion of the muscle has been torn. In these cases, Dr. Nwachukwu prefers a conservative approach which includes rest, ice and a compression band or wrap for support of the healing muscle. Anti-inflammatory medications can alleviate hamstring pain, and physical therapy may also be recommended to restore strength and range of motion. If the patient is unable to improve with this program, Dr. Nwachukwu may use an ultrasound-guided corticosteroid or platelet rich plasma injection which has been shown to provide pain relief.

A surgical repair is often performed in patients who have experienced a complete tendon avulsion injury, where the tendon has completely pulled away from the bone. During this procedure, Dr. Nwachukwu will relocate the hamstring muscle and tendon back to its correct position, remove any scar tissue, and then reattach the tendon to the bone. This procedure has a high success rate of alleviating hamstring pain and restoring strength.

What is an endoscopic hamstring repair?

For small hamstring tears without significant retraction, endoscopic hamstring repair can be performed. Endoscopy means “looking inside” which is how Dr. Nwachukwu can treat some hamstring tears. A special instrument, called an endoscope, is inserted into the buttock at the location where the hamstring is torn. Small surgical instruments are also inserted through separate incisions, and are used to perform the repair using a minimally invasive approach.

What is an open proximal hamstring repair?

Open surgical repair of a torn hamstring has been the standard of care and is commonly performed for tears that involve more than one tendon, is chronic in nature, or where there is significant retraction. An open repair of a torn hamstring involves a standard incision where Dr. Nwachukwu can directly visualize the extent of the injury and retraction.

How long is the recovery after a proximal hamstring repair?

Post-operative recovery for both open and endoscopic surgery typically requires 6 weeks of restricted weight bearing to protect the repair. Patients will be expected to use crutches and a brace during this time. Dr. Nwachukwu will prescribe a physical therapy program with gentle stretching exercises to improve range of motion and flexibility. The majority of patients can expect a return to activities between 3-6 months, depending on the severity of the hamstring injury and extent of the surgical repair.